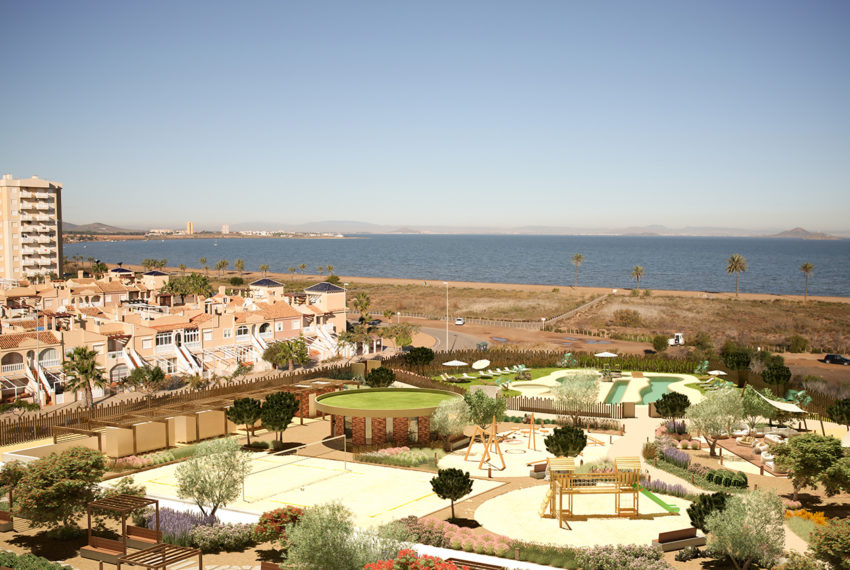 All apartments with sea views

Handing over 2020( all communal areas finish 95% before handing over)

Our plot is located next to a protected area in which various species of birds, including the eponymous flamingos, have found their natural habitat.

The urbanization of the development is an attempt to extend that natural space by designing the
landscape as a setting in which to locate purely Mediterranean plants that adapt perfectly to
their surroundings. Nature as the backbone for the project. A permeable fence formed by
wooden logs allows the limits of the plot to be defined while not disrupting the view of the
surroundings.

Once inside the plot, we find a series of leisure spaces, garden with shady trees such as olive trees and Aleppo pines; aromatics such as rosemary and lavender that, together with another series of plants.

In this project, is the element linking together the spaces, the transit areas, the creation of rest areas, shade,..…aromas, colors.

The bird observatory, a play area for pets, a chill-out area, a locker area for us to store beachside items; sports amenities for all ages such as a boules area, a circuit for joggers, a beach volleyball court, a gym; spaces for expanding the imagination of the youngest members of the family like a playground with a log cabin, and places to sit and read.

The fact that the buildings are concentrated on the southern side of the plot means that
the free space available is of considerable proportions. In other words, natural space becomes
the main protagonist of this story.

The swimming pool will provide us with a raft of tactile, visual and olfactory sensations to
complete our leisure experience.

Once inside the building, we will find a series of elements complementing the amenities, such
as a fully-equipped spa designed for rest and relaxation, a wi-fi room, a gourmet hall and a
series of bicycle racks.

The design of our exterior joinery reaches one of the best standards in thermal insulation.
Interior joinery. For your security and safety, the entrance door to your home is armored and has a security lock, anti-jimmy hinges and an optical peephole.

In the kitchens, the socle on the worktop will be in porcelain-like ceramic, combined with acrylic paint depending on the type of home.
In the bathrooms, our clients will be able to choose from several models of cladding. The exterior surfaces of the terraces in all homes will be finished with non-slip wood-imitation porcelain-like tiles.

Bathrooms will have showers, glass shower doors, washbasins on worktops and toilet fittings of the highest quality. Taps will be lever-operated mixer taps.

So that our customers do not lose contact with their countries of origin, equipment is included for the capture of television signals totally free of charge in Spanish, Russian, French, English and German. Communal areas will have integrated automatic motion detectors to light on.

For greater comfort in your home, the heating and cooling installation (hot and cold air) will be fitted through conduits.

Heating and hot water will be generated from aerothermal energy, an innovative system that minimizes the use of fossil fuel by recovering energy from renewable sources, in this case the heat contained in the air.

The kitchen: Equipped with cabinets in high-gloss white finish, and also domestic appliances to make those wonderful recipes: a conventional oven, a ceramic hob, a fridge-freezer, a microwave and a decorative extractor hood. A single-basin stainless steel sink with a lever-operated mixer tap.

Modern lifts, suitable for people with reduced mobility, will be fitted with a selective memory when descending and automatic, high-quality and efficient doors, as well as low noise levels in operation. Lifts will incorporate a variable-frequency drive to provide greater security and also to extend the working life of the motor as well as any associated mechanical parts.

This is a Europe’s largest lagoon, which maintains a warm sea temperature in whatever stage of the year (except December and January when only the most hardy Brits will brave the waters!) – with an average of 18 degrees centigrade. The Romans and the Arabs built thermal baths around the coast, and to this day people visit the area for the therapeutic properties of the bathing. There are also pockets of therapeutic ‘mud’ which is sought after (mainly by the Spanish) to cover their bodies and bake in the sunshine, this is very good for skin problems or arthritic conditions.

Its waters are rich in iodine and never get deeper than 7 metres. It is a haven for water sports such as jet skies, kite surfing, sailing boats and fishing. The warm, crystal clear waters, shallow shore lines and beach inflatables also attract many families in the summer months.

An added bonus for aircraft enthusiast and visitors alike, is the imprompru aerobatic dispays from the Spanish equivalent of the Red Arrows, the Spanish national aerobatic team – Team Aguillas. It is a pleasure to see the whole team of seven jets performing intricate routines over the Mar Menor, often with streams of coloured smoke to enhance their performance.

With 250km of coastline, the Costa Cálida (Warm Coast) is one of Spain’s fastest growing holiday hotspots. Along with the Mar Menor, the coast of the Costa Calida is home to water sports, fishing, scuba diving, sun bathing and nature reserves.

The Costa Calida covers the area from the top of the Mar Menor right along to Aguilas. It has in recent years been more popular due to the ease of access of cheap flights and improved road systems. Although the region was a late starter in the building stakes, it has benefited from the mistakes made in other areas and has ensured that there are plenty of green areas, and high rise buildings are only allowed on the La Manga strip and then only to a height of 9 storeys 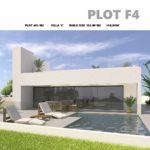 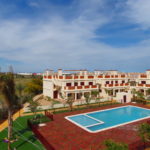